This tutorial shows how to use more Caffe2 features with simple linear regression as the theme.

This is a quick example showing how one can use the concepts introduced in the Basics tutorial to do a quick toy regression.

The problem we are dealing with is a very simple one, with two-dimensional input x and one-dimensional output y, and a weight vector w=[2.0, 1.5] and bias b=0.5. The equation to generate ground truth is:

For this tutorial, we will be generating training data using Caffe2 operators as well. Note that this is usually not the case in your daily training jobs: in a real training scenario data is usually loaded from an external source, such as a Caffe DB (i.e. a key-value storage) or a Hive table. We will cover this in the MNIST tutorial.

We will write out every piece of math in Caffe2 operators. This is often an overkill if your algorithm is relatively standard, such as CNN models. In the MNIST tutorial, we will show how to use the CNN model helper to more easily construct CNN models.

There are two graphs that we declare: one is used to initialize the various parameters and constants that we are going to use in the computation, and another main graph that is used to run stochastic gradient descent.

First, the init net: note that the name does not matter, we basically want to put the initialization code in one net so we can then call RunNetOnce() to execute it. The reason we have a separate init_net is that, these operators do not need to run more than once for the whole training procedure.

The main training network is defined as follows. We will show the creation in multiple steps:

Now, let’s take a look at what the whole network looks like. From the graph below, you can find that it is mainly composed of four parts:

Now, similar to all other frameworks, Caffe2 allows us to automatically generate the gradient operators. let’s do so and then look at what the graph becomes.

Once we get the gradients for the parameters, we will add the SGD part of the graph: get the learning rate of the current step, and then do parameter updates. We are not doing anything fancy in this example: just simple SGDs.

Now that we have created the networks, let’s run them.

Before we start any training iterations, let’s take a look at the parameters.

Now, let’s take a look at the parameters after training. 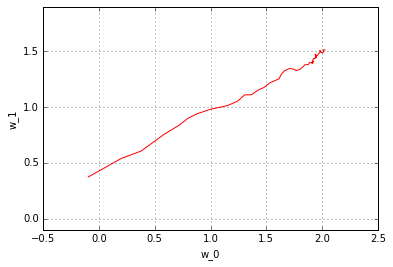 You can observe the very typical behavior of a stochastic gradient descent: due to noise things fluctuates quite a bit over the whole training procedure. Try running the above ipython notebook block multiple times - you’ll see the effect of different initializations and different noises.

Of course, this is a toy data case - in the MNIST example we will show a more real-world example of NN training.